Passengers who travel by ferries to Santorini are stunned by a geological phenomenon where volcanic black and red sand meet the sea below a mountainous village!

Opposing the well-known volcano lies the beautiful and stunning Santorini, proud on the top of the cliffs and 500 meters above sea level. Santorini or Thira is the southernmost island in the Cycladic Island complex and together with Mykonos, the most famous and most visited. Compared to its sister Mykonos, Santorini is mostly preferred by couples and families since it provides a uniquely romantic and relaxing environment. Although it is a rocky island, there are beaches suitable for swimming and they are actually pretty admirable due to the fact that they combine volcanic black, white or red sand with the crystal blue Aegean water, forming dazzling landscapes.

By the time you are reaching Santorini, you will be able to see the graphical houses on the hills and the luxurious hotels with their private pools under colorful lights making you already feel the charming atmosphere. In the Santorini’s capital, Fira, you will find many accommodation options along with bars, shopping places and restaurants serving mostly the delicious Greek traditional cuisine.

Organize your holidays in Santorini, Greece by firstly making your Santorini booking early and not at the last minute in order to be sure that there are available ferry tickets. Thira is very popular thus ticket capacity tends to run out very fast.

Getting to Santorini port, Athinios, can be achieved from the Greek mainland’s ports of Piraeus and Rafina. There are several companies providing routes with many different ships, both conventional and high-speeds. Depending on the vessel, the duration of the voyage from Athens to Santorini fluctuates between 4.5 to 9 hours. Santorini’s location makes it easy to be reached also from the close islands Mykonos, Paros, Naxos, Ios, Milos, Amorgos and Crete and many travelers hop for one-day excursions.

Get from the biggest port in Greece, Piraeus, to Santorini in an average of 5 hours, depending mostly on the type of vessels and maritime traffic. There are several crossings every day from many ferry companies so there is no need to worry about the schedules.

Note that, it is also possible to find ferries from Athens to Santorini from the port of Rafina on the eastern side of Athens and for some may be a more convenient choice due to the fact that the particular port is very close to Athens International Airport.

For the reason it is the only port serving routes, in high season months, it gets really crowded and the possibility of delays is big. Passengers who get off their ship will find in the area many cafes and restaurants while also transportation services like public buses, taxis and private transfers which cooperate directly with the hotels. Have also in mind that the Santorini port is only 10 km away from Santorini airport.

The port is located on the southwestern side of the island, north of Megalochori village and south of the capital, Fira. After you land, it will not be hard to see the taxi stand and the bus stop.

Note, that most hotels in Santorini offer their own minivan service that will transfer you from the Santorini ferry port to your accommodation and vice versa - call them in order to ask for availability and organize your transfer.

Below, you are given information so as to organize your transportation with a bus or a taxi.

There is a public bus transfer service with daily connections to and from Santorini port (Athinios port). For more information, please visit the Santorini Bus or call +30 22860 25404. All bus connections start and end in Fira town (Terminal: 25 Martiou str. and Danezi M. str., near Alpha bank). Passengers going to Oia town have to switch buses in Fira's bus terminal.

It is a sure thing that your Santorini holidays will be exceptional and unique. The island is considered to be one of the best places in the world and thousands of tourists visit it all year long, especially from March until the end of October. Moreover, Santorini is a favorite destination for those who want to spend their honeymoon or even arrange a wedding. Budget-friendly accommodations but also luxurious 5-star ones on the edges of the cliffs with private pools and spa centers, gyms, and professional services are waiting to make you feel the Greek hospitality.

None can say that there is the best beach in Santorini since each one is one of a kind. The volcano’s eruption has made a miracle to the island and formed three magical beaches, the red beach, black beach and the white beach which all deserve a visit. There are also numerous other beaches to sunbathe and swim with plenty of eating places nearby.

It is recommended to stay on the island at least 4 days in order to get a full taste of it. There are many sites like the Santorini caldera, the sunset in Oia, Imerovigli, Kamari, the famous winery (vinsanto) being one of the best in Greece and many more.

Below, we provide you some must-sees according to visitor reviews.

Plenty of hotels in Santorini, all over the island for all kinds of visitors, with the luxurious ones coming out from fairytales. There is also the opportunity of booking villas or resorts with all-inclusive packages suitable especially for families.

Here are some suggestions for hotels in Santorini:

Although Santorini’s beaches are not what the island is known for, they are not to be underestimated. Except for the most famous ones, the black, the white and the red, there are many more options for all tastes, organized with umbrellas, sunbeds, beach bars while also secluded ones.

Some worth visiting beaches are:

Make sure you take a visit to the graphical villages in Santorini and do not forget to bring your camera along because you will regret not capturing all the stunning sceneries you will see followed by emotions.

Probably the most visited area in Santorini, Oia definitely deserves a visit. Known for its dreamy sunset, countless people travel from thousands of miles away just to witness its beauty. Oia in Santorini offers some of the best hotels on the island.

Tip: Make sure you arrive at Oia early, 2-3 hours before the sunset in order to find a nice spot to sit and enjoy the miracle since it gets really crowded every day.

Kamari is a coast on the east side of Santorini and is recognized for its Blue Flag beaches. You can find both pebbly or sandy ones, all accompanied by beach bars and restaurants. The nightlife in Kamari is very lively too.

Imerovigli or else called “the balcony to the Aegean” is, along with Oia, the best spot to watch the sunset. It is very graphical with the Cycladic architecture dominating. Everybody would like to have a house in Imerovigli, placed on the cliffs providing the feeling of ultimate freedom.

Take an evening stroll at the settlement of the Bronze Age in Santorini’s Akrotiri. It was considered to be a very important place and port in the Aegean until the day it was covered by volcanic ash.

Firostefani is a part of Santorini’s capital, Fira. In Greek, “stefani” means “crown” so theoretically its name means the crown of Fira and this is because of its higher position, offering great views over Santorini’s volcano and the Aegean Sea.

Santorini’s position makes it a perfect spot for day trips to the close islands such as to the beautiful and also romantic Milos with its worldwide famous beaches, Folegandros with its picturesque town, to the cosmopolitan Paros, Naxos and to the peaceful, exotic and uprising destination Koufonisia.

Popular Routes from & to Santorini 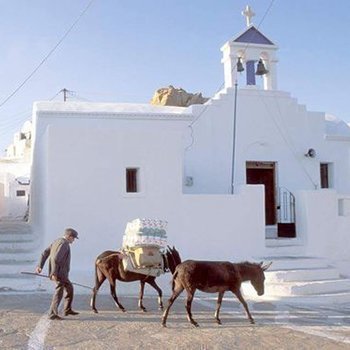